On Sunday, February 28, EU Ambassador in Moscow Vygaudas Ušackas with his counterparts from the 28 EU countries and Norway came to the Big Moskvoretsky bridge in the centre of the Russian capital to honour the memory of russian opposition politician and statesman Boris Nemtsov, killed Feb. 27, 2015.

“We want to express how it is important that those who organized and carried out this brutal crime have to be brought to criminal responsibility”, – said Ušackas. Sweden’s ambassador to Russia, Peter Eriksson said that he, like all his colleagues, waiting for the results of investigation of the murder of Boris Nemtsov.

On the day of the anniversary of the death of Boris Nemtsov,the US Ambassador to Russia John Tefft put flowers to the place of Nemtsov’s death. 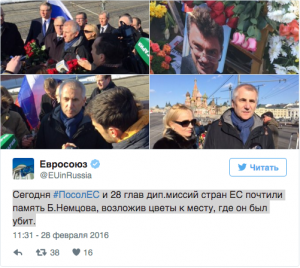 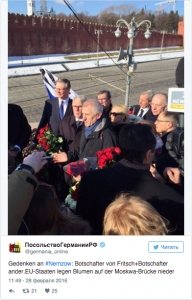